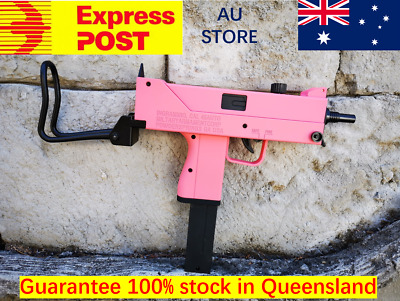 Note: To insert the battery remove the round plastic cap toward the front near the barrel on the side of the blaster. Use the alan key provided to remove the screw inside under where the cap has been removed.

Well that was fun while it lasted.
It’s now a paperweight. Avoid 11v.

Bummer… Can you get a replacement motor? Or did it just disintegrate the gearbox into its separate molecular components

Gears gave up. I hadn’t made any changes to the gearbox. Might be just bad luck.
Been talking to ihobby so we’ll see. A complete swap would be counterproductive.

I thought you put the metal ones in there?

I didn’t get the metal and now Zd no longer carry them, or much of anything.
I compared some spare 3DG G17 gears I had and there is just enough variance for them to not fit.
Though of splicing 2 together as I have small gears from everywhere only the torque at that gear is rather high so it’s unlikely to hold up.

Last resort could be a MAC10 5S, QBZ, MP7 or P90. Have those in stock. They’re all longer and will stick out the back. As I said earlier, this gearbox is unique and the only one so far that could fit inside an LA2019.
That reminds me, did you order it?

FYI. True size comparison.
This blaster should rightly be called a MAC11

Sad about Zhenduo too. Shit things happen to good people. Hopefully the China situation turns around for them.

Didn’t order it as this month is a shit one with bills, medical bills and related shitfuckery perhaps next month…

The human condition does get in the way of life and the clock keeps ticking.
Enjoy life while you can.
The human warranty conditions are no better than some of the clowns in this industry.
No exchange or warranty, repairs may not work and there are days when I feel 2nd hand.

I doubt the situation with China will improve.
They’re writing cheques their own people can no longer cash and escalating brinkmanship beyond the point of insanity. Saving face usually means they would rather be beaten down than back down and that means it is going to get ugly.

Got the cheaper pinky.
Flat to 16-17m OOTB without hop up. Encouraging.

Have 2 now and tried the wrist strap for the 1st time.
Mmmm…NAH!
Man-size grip with a child-size strap?
Export market guys, know your buyers.

Then tried to chrono with the same WI Reds that gave a respectable range.
Not too unusual. Needs a bit of tidying I think.
I’ve shown how it can perform with the first unit.

The power is there so I expect something along the feed needs trimming.

Then there were 2.
There appears to be enough plastic on the fake outer barrel to tap a 14x1 CCW thread on it.
Never know till you try, eh?

IS THE BF MAC WORTH IT?
I reckon.
After a tidy and a hop up, this thing will still be a cracker, esp at $142.50 less forum discount.

The only real issues I have with the BF are

I’ve shown above that both outer barrel mount and trigger can be fixed if required while battery access is only an issue if the blaster is used as the primary weapon.
Cut an opening there and modify the sling mount so it works as a swivel door or have the front pin secured by some kind of ball catch instead of that hex bolt and the access issue is gone.

I’ve modified our bf Mac 10s for better battery room. It doesn’t like softer gels on 11.1v the mag motor shreds them. Was thinking of maybe putting a diode in the mag to slow it down a bit.

PS.
Something to try.
I did this with the BY MAC10 and is what led me to change the diode in the precharge from a smaller silicon back the germanium it came with.

It should sound different and the only difference between the 2 circuits is that one includes a diode.

So the BY will handle an11.1v better than these BF’s?

I didn’t expect that but a full swap wasn’t practical with all the work I’ve already invested in mine so was prepared to just cop it. It’s only fair.

I offered to swap gearboxes and return it but was told not to.
Left me speechless.
All I can say is Thank You ihobby!

They both will handle it.
I’ve run both with 11v, including the new pink one,
Technically, the BF is better designed and set up for 11v.
The main diff with the voltage is faster trigger response and higher rps and gearbox being more conpact with metal bushes should be fine. The teeth are finer but they mesh well.

Time will tell but I reckon the gear strip is likely a one-of.

Hey all! I ended up grabbing the v2 BF Mac10. 3 mags later, wasn’t running well at all. Silly me opened the gearbox to investigate. Found a gear that had totally stripped, except 1 tooth. Would like to find a replacement gear, but am having trouble locating. Anyone got any info on this?

Thanks for reply. Waiting to see what iHobby says, as I’ve already opened the gearbox to see what was wrong. Silly I know. But I can usually fix my own problems. Hopefully they are as curtious to me as they were to you.