I was wondering if any of you had come across a metal receiver for the M24, I am going to be running a 1.5mm spring with metal internals and bolt to accommodate it. However I have heard that the ABS housing receiver, can bend and warp under pressure; an issue which im kind of worried about given the 1.5mm spring haha

A metal receiver would be amazing and feel and function much better, so if anyones heard anything I would love to hear about it!

This is what you want

Unfortunately it’s not in stock anywhere I can see. There’s also a metal barrel kit with a metal outer barrel, never seen that one personally though.

Hey, thanks for the reply, actually I already have a metal bolt upgrade, as well as the internals; trigger, bolt column, mag release etc.
and I have a tapered metal barrel/inner barrel/t-piece set on the way which should arrive shortly.

What I am actual looking for is a metal receiver e.g this: 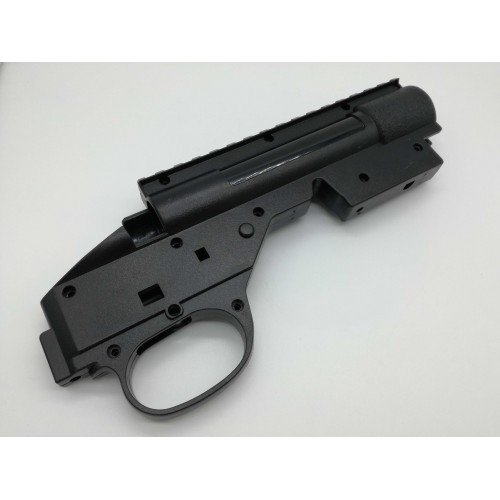 As it will allow for the metal internal components to support the 1.5 spring without warping the previous ABS housing.

Ah I see! I haven’t seen one of those sorry

got what sorry? I have alot of parts.

hmm, which metal receiver? I dont have one this thread was made in an attempt to source one?

there is a chap who is getting about with one but hew has a fitter friend who isn’t interested on doing more.

if anyone tool paths one (CAD / STL) we have chaps here with tooling that could produce it but to date (including myself) no-one has been arsed making a toolpath.

on that note, does any one here have or know of where access can be had to a 3d scanner?

What exactly would be required to produce this as far as models go, and how would this feed into creating a metal receiver? I would have assumed any such reciever would have to be cast in a moulding, but a metal 3d printer would be an amazing solution! Hmm I could potentially gain access to a point cloud scanner, they may even have other forms of them at my university; and idea on what a preliminary costing of fabrication would be?

On a side note is the person who fabricated the one you mentioned still a part of this forums, it seems that this is quite a sort after product and he may stand a bit of money if he changed his mind

Can confirm, yes I can gain access to a 3D scanner, potentially as soon as Monday. Would we need a specific file type after scanning? or to potentially clean up the data once scanned? I haven’t worked with one before so I’m not exactly familiar with the process.

So we have a lad here with an end mill. Not sure how far down the line with setup etm.

If you 3d scan it in, tidy it up in a cad package

It could be milled…

Allright, I will go in monday and see what I can do as far 3d scanning the reciever, I have a fairly hectic week so dependent on how fast the job is i could possibly have it done by this week. Do you know what the costing on a metal printed piece this size would roughly be? wondering if its cost effective haha like if it was $200+ might not be worthwhile

hmmm actually after considering it I’m really keen on a metal reciever for my m24 so may be willing to fork out for the 200 mark afterall haha, Ive been actively trying to sort out bookings for the 3d Scanner tomorrow; however the process seems to be quite convoluted haha, hopefully it shouldnt be an issue.

Considering this will pretty much be the be all and end all of recievers for the m24; and most people opting for this upgrade will more then likely have either an installed V2 or V3 bolt system installed, I would be fairly keen if the end product would have a cleared ejection port, I think this would be a pretty badass feature, thoughts?

So a while ago we all drooled over someone’s inspired and sexy ejection port work… At the time I wanted to but had that trigger release issue and promised to show and tell when I got off me ar53 and did it So for the n00bs in particular, toolset and output is in images Note to all: if you use the internal guides you will remove allot more material than is needed and probably create a weaker receiver housing than you want. Probably [IMG_20190706_095909] [IMG_20190706_095832] [IMG_20190706_0958…

Don’t take that the wrong way, I have 3 sniper rifles and a shotgun and they are a lot of fun plinking cans and targets in the backyard and even the odd gecko

Eh value is found in what one sees value in, it might honestly not be achievable but I would love to see a bolt action being possibly somewhat accurate at 40-50m, for that you would need a great hopup, consistent and un-deforming gels; which are getting far better with armourtechs and ultras, a hell of a spring to launch the gel; hence the 1.5mm, and hardware to support it, curently we have the metal internals but it seems excessive strain is causing deformation in the reciever, so the next logical step is to get something which can stand up to the exerted force

. after this it will more then likely be a matter of gels being developed to the point that they could be made heavier and/or harder, oreven in the future maybe a twisted barrel haha who knows where we will go from there… the options and possibilities are limitless!

but for now I’m definitely keen to get a metal receiver none the less, and I can definitely see the point

, if not only for the reasons mentioned above, then most importantly because it would be awesome! haha.

Lol I can tell you unless you have a friend with CNC machining centre willing to put in the time for free you won’t even get one made for less than 3 times $200 or more.
Even the MK Tactical cnc boxes can only be made for that price because they are made in huge quantities and that is only possible because they are made for the most popular blasters on the market, a sniper rifle would be the least popular style on the market so the quantities would be very small so the cost will be prohibitive unless you can find hundreds of guys who want to do it .
Good luck with that !
Machining is the industry I have been in for nearly 40 years and know that a cnc needs to make at least $150 per hour plus consumables and material costs to be profitable.

Well there seems to be a market if “its an ancient desire from those who have come before you…”, and the modification maket for the m24 has yielded not one but multiple versions of the metal bolt system which have been iterated upon for the gel blaster and arent prohibitively expensive, I would be quite keen to get some 3D scans and see if we can make this a reality who knows what might happen, if you have been in the industry for 40 years maybe you could hook the community up with some contacts in the industry who could do it for cost or at a discounted rate…

I personally am petty excited about the idea, everyone finds value in something though… Anyway I will try to get these scans done tomorrow and maybe we will see something eventuate from this