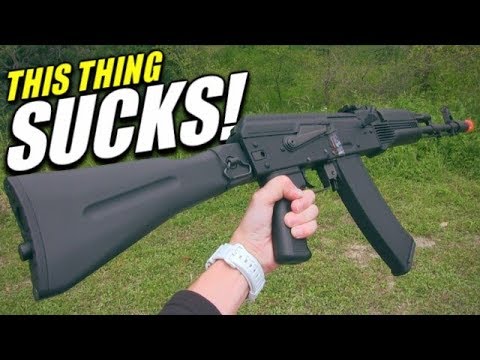 well to be fair, the Alpha King line of AKs (74m,74ms,105) are very similar, just because an air soft G*n looks like a gel blaster, doesn’t mean that there are the same in every way. the internals can always be the same as it is an air soft gear box and internals while gel soft has similar but yet very different internals, also with the AlphaKing, the recoil is attached to the bolt/charging handle and doesn’t have the empty mag thing. sure its possible that the body of the KWA AK was copied to be used in the AKA, but it doesn’t mean that it will hinder performance, remember, Don’t judge a book by its cover. also the red dragon gearbox is a good gearbox and shouldn’t fail you.

Cheers man! I’m aware of the differences between the two sports and mechanical operation of our gel blasters!!
Is the first v3 style box I have owned and am just hoping it’s not a shitheap… Not judging the blaster in anyway at all. I quite like it actually, I was just pointing out the mirror image like similarities in the furniture…

Also man, have a feel of the Alpha King compared to say an ACR or Vector, the AK does feel very cheap n flimsy next to them… But again, not taking away from the whole package, it is an awesome and no need to mod blaster. Hop up and your good for days.
Only real gripeis the battery compartment is so small, no real estate for an 11.1v and the timber handguard and stock kits, there just weren’t enough imported to cover a quarter of the blasters imported. And as far as I have found is the only upgradeable parts. Can get a scope mount and shit but it’s an all…